I meant to reblog this when IHRA first posted it earlier in the year but I got sidetracked and forg…oh look!  A butterfly just went by!  Wait, what was I talking about?

Anyway, I remembered it after I posted this the other day, so here ’tis.

Source: 9 Photos of Dogs in the Pacific Theater during World War II

We thought we’d do something a little different this week and show you some of the furry, four-legged friends that were adopted by various men as pets during their stay in the Pacific Theater. 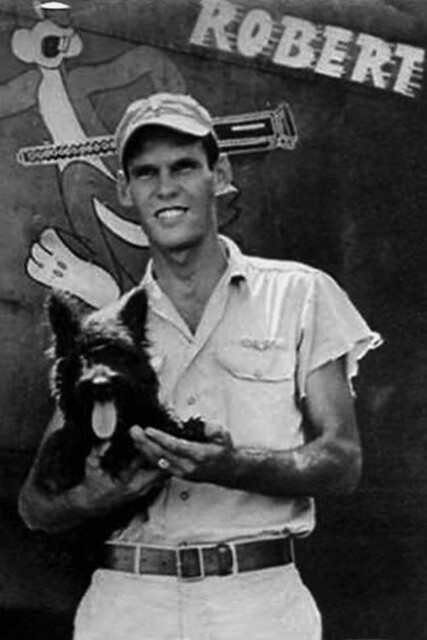 In 1944, 1/Lt. Robert L. Mosely of the 89th Squadron, 3rd Bomb Group stands in front of his A-20G, RAPID ROBERT, in Hollandia. The name of the dog is unknown. (Robert L. Mosely Collection) 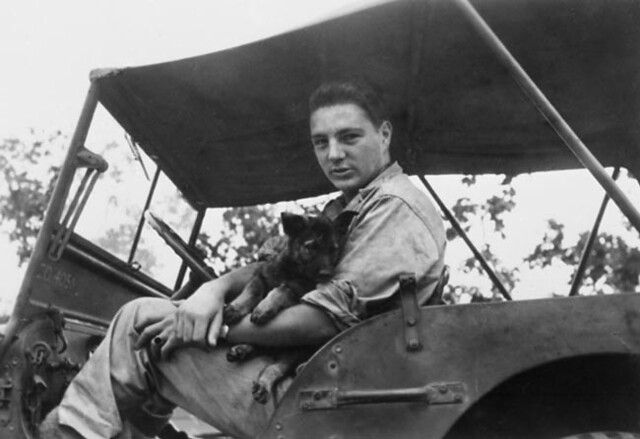 Sometime during the 38th Bomb Group’s stay in New Guinea in 1943, this picture of Ralph Cheli sitting in a Jeep with a puppy was taken. We do not know to whom the puppy belonged. (Garrett Middlebrook Collection) 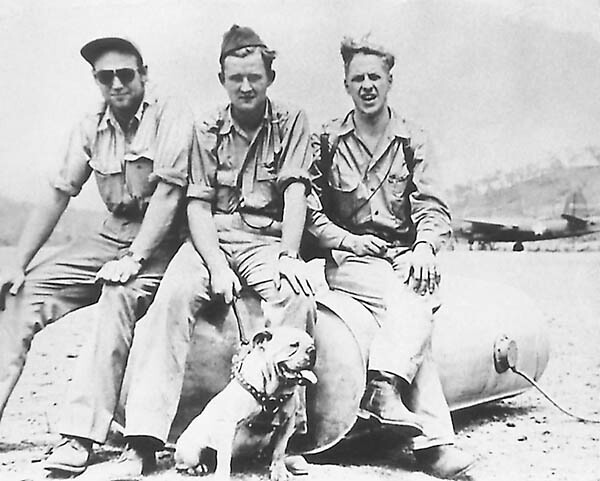 1/Lt. John D. Cooper, Jr., pilot, 1/Lt. Raymond Bringle, navigator, and Capt. Franklin S. Allen, Jr., pilot–all from the 19th Squadron–and Blondie, the Squadron bulldog who flew many missions. The men are resting on a gas tank after a mission to Buna on August 27, 1942. 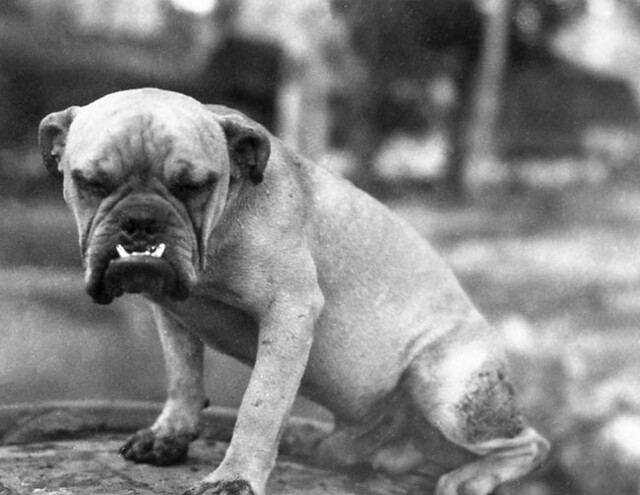 At some point during the war, the 3rd Bomb Group’s 13th Squadron adopted this dog as their mascot. (Joseph Brown Jr. Collection) 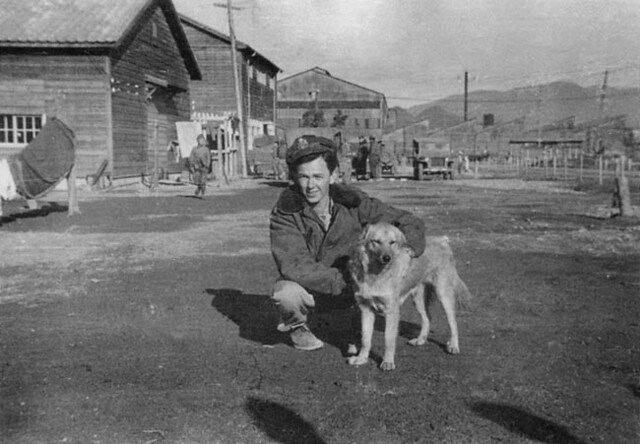 Lieutenant Phillip Baldwin poses with his dog Duffy for a picture in October 1945 at Fukuoka, the 38th Bomb Group’s final base in Japan. (Phillip Baldwin Collection) 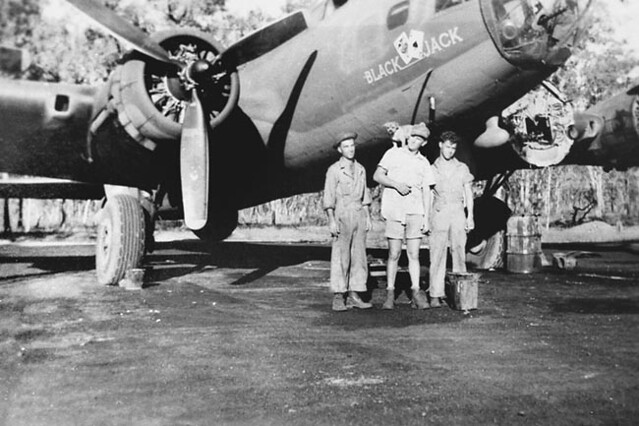 These men in front of the 43rd Bomb Group B-17 nicknamed BLACK JACK/JOKER’S WILD have a cute addition to their ground crew sitting on someone’s shoulders. The names of all four are unknown. (Charles R. Woods Collection) 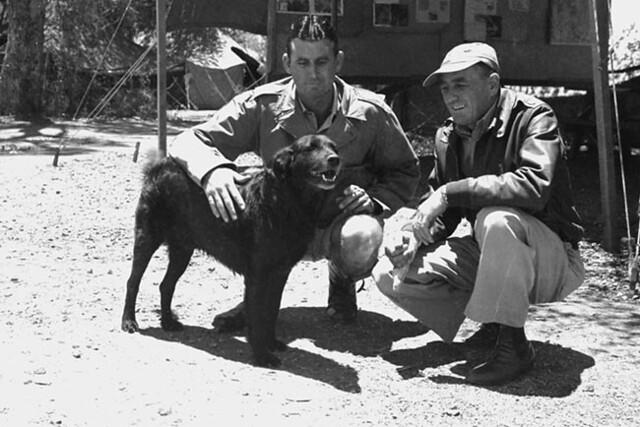 Colonel Jim Davies and “Pappy” Gunn give this happy dog some attention at Charters Towers in early 1942. (Alexander Evanoff Collection) 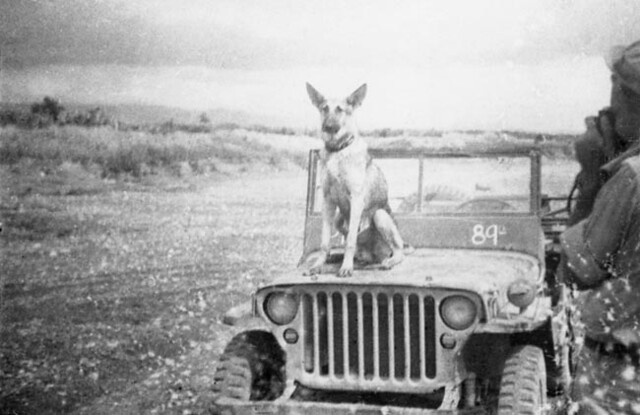 Pilots on leave in Australia might return to New Guinea with dogs as pets. Butch, a German shepherd belonging to 1/Lt. John D. Field of the 89th Squadron, was a favorite of the pilots, especially Robert L. Mosley. Once, Mosley even took Butch on a medium-altitude mission to Manokwari when he was the pilot of the B-25 leading the A-20s over the target. Butch was fine until he was startled by the noise from the bomb bay doors opening and he began barking. Butch’s antics helped to relieve the tension, claims Mosley. “Here I was getting shot at, trying to blow up a bunch of airplanes and people below … and I’m in hysterics, looking back at Butch and his antics. The only dying that went on that day was me dying laughing at Butch. The bombs probably went into the ocean. We used to call that ‘bombing the sea plane runway’”. [sic] (Robert L. Mosley Collection)

A canine supervisor watches dollies and handlers bringing bombs to an RAF Boston at an air base in Britain, Feb 1942.  Good puppy dog…